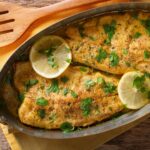 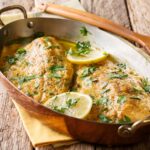 This fish recipe for roasted Monkfish with romesco sauce is ideal for dinner parties and is a winner with everyone. The tasty, romesco sauce makes a perfect partner to the Monkfish. This is a simple fish recipe that anyone can make, and it’s utterly delicious.

Is Monkfish good for you?
Monkfish is a low-fat, low-calorie source of selenium, although its omega-3 fatty acid content is lower than that of other fish. Mercury levels in Monkfish are tiny. The flavour of Monkfish is mild and slightly sweet. The only part of the fish used is the tail meat, firm, dense, and boneless.
Look for new, vivid, transparent colours and textures when buying any protein. Dryness or dull, cloudy colours should be avoided at all costs. Although fish will still smell like fish, it should only smell like fresh fish straight from the sea.

Is Monkfish safe to eat?
Carp, Bluefish, Monkfish, and Snapper are all included in the “Healthy Choices” group (eat once a week). The FDA only advises avoiding shark, king mackerel, marlin, orange roughly, swordfish, tilefish, and bigeye tuna because of their high mercury levels. There are many fish recipes online; you have plenty to choose from.

Does Monkfish look appetising?
They might not look appealing, but they are delicious. Monkfish aren’t particularly attractive. On the other hand, Monkfish become delicious when washed and baked, with a sweet flavour and firm texture. Monkfish is prized for its firm, lean, bright-white flesh and mild, sweet taste, which lacks many people’s perceptions of fish. Monkfish is often referred to as cheap tasting lobster because they have a similar flavour to lobster but cost a fraction of the amount.
How to cook Monkfish, the sea’s most delectable beast.

Recipe for making the romesco sauce 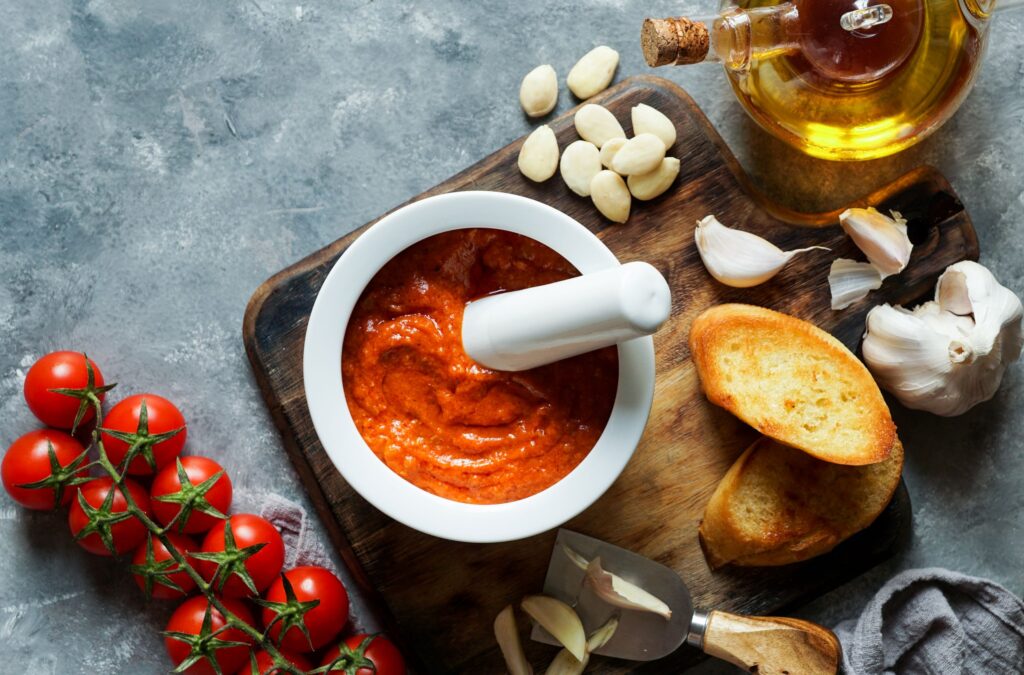 Roast the whole garlic cloves, tomatoes, and hazelnuts in a shallow roasting tray for 10 minutes before adding the chillies. Cook for an extra 5 minutes, or until the hazelnuts are golden brown. Scrape the flesh out of the tomatoes and combine it with the egg yolk, chillies, hazelnuts, and garlic in a blender. To make a smooth sauce, blend at high speed and slowly drizzle in the olive oil. After that, add the vinegar, season with a pinch of salt and pepper, cover, and set aside.

How to cook the monkfish
Remove the fish from the fridge 30 minutes before serving to allow it to come to room temperature. Preheat the oven to gas mark 6, 400°F (200°C), and gently oil the fish fillets when ready to cook. Heat the remainder of the oil in a medium/large frying pan until it is very hot, then add the oiled fillets and lightly brown them.

Add to a roasting tray
Add to a roasting tray and cook for 10-15 minutes on the top shelf of the oven. Remove from the oven and season with salt and freshly milled black pepper, as well as a squeeze of lemon. Allow the fish juices to bubble over high heat if necessary to minimise them. Slice the fillets diagonally on warmed serving plates, drizzle with a little of the fish juice, and top with romesco sauce, parsley sprigs, and lemon wedges.